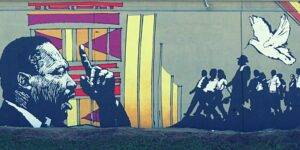 A celebration of MLK BLVD and showcase for the upcoming King Blvd Feature Film.

The King Blvd Block Party is a fundraiser to support the upcoming King Blvd Feature Film.

There are over 900 streets in the USA that honor Rev. Dr. Martin Luther King Jr. The dark reality on many of these streets do not reflect the empowering light Dr. King stood for. His core message was equal representation, inclusion, peace, and prosperity yet on many MLK BLVD streets residents suffer from lack of resources, crime and diminishing opportunities. The King Blvd Film will discuss these issues and highlight how to improve the conditions on MLK BLVD.

During the King Blvd Block Party attendees will learn about the King Blvd Feature Film from the creative team behind the project. Guests will also take part in an informative community panel discussion about MLK BLVD with MLK BLVD researcher Dr. Derek Alderman and community leaders from across the country. Musical performances and Spoken Word Artists will entertain and uplift.

NBC 5 Dallas-Fort Worth profiled the King Blvd Block Party. The interview highlighted the event, the theme and mission of the feature film as well as how the creative team feels this project can spark positive change in our society. We invite you to view the conversation HERE!

Boise Holmes, a Baltimore, MD native, has been seen in numerous Film/TV projects which include: Kiss the Girls, Chicago Fire, Law and Order SVU, 30 Rock, CSI:Miami and Days of Our Lives. Some Voice-Over/Commercial’s include: Wal-Mart, Toyota, Verizon and McDonald’s. See his work

In early 2019 our team created the KING BLVD “Short Film”. This content was created to provide a visual example of the themes, humor and heart of this idea. Once funding is secured for the KING BLVD Feature Film, many of the elements depicted in the short film will also be portrayed in the feature film.